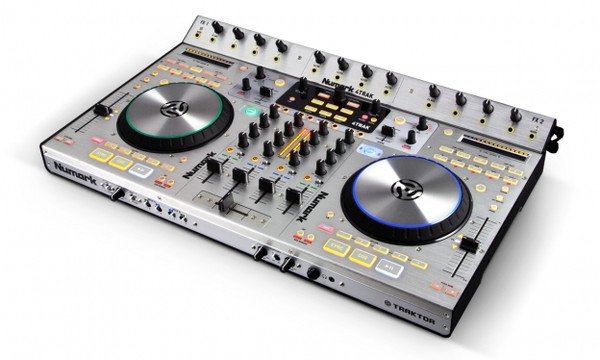 Mix anything. Tweak everything.

Four decks of software control, a four-channel mixer and total command over all effects: Meet 4TRAK, the ultimate controller for TRAKTOR DJ software. 4TRAK lays out a vast assembly of tactile controls in front of you, putting a playground of capability at your fingertips. Mix anything: 4TRAK's built-in four-channel mixer allows you to bring turntables, microphones, MP3 players and more into the mix. Tweak everything: High-resolution platters, exclusive Strip Search needle-drop technology and an expansive 12-knob FX KOMMAND CONSOLE give you more precise control over TRAKTOR than ever before.

At the heart of 4TRAK is a premium-quality fully independent four-channel mixer that can be used with or without a computer, making 4TRAK one of the most versatile TRAKTOR controllers in the world. 4TRAK has a full range of input and outputs for connecting virtually any device: RCA inputs on each channel and four line-level inputs with two switchable to phono and two switchable to mic. Connect almost any external music source like turntables, CD players and microphones, and mix them in seamlessly with tracks from your software.

4TRAK offers unparalleled control over your effects and filters. With the FX KOMMAND CONSOLE, you have top-level access to effect and filter parameters, giving you incredible performance capabilities. Layer effects, adjust filters, and mix and match both of them in ways that were previously impossible.

4TRAK's FX KOMMAND CONSOLE gives you two decks of effects controls, FX1 and FX2, plus four detented filter knobs for each of 4TRAK's four channels. Both the FX1 and FX2 decks give you three controls that can be assigned to the effects of your choice. Each FX deck also features time division controls, allowing you to match your effects to a track's BPM instantly, and giving you continuous control over an effect's pacing.

Each of 4TRAK’s channels has an input selector, so you can instantly transition between controlling TRAKTOR's four decks and your external sources. Connect two CD players, two turntables, two mics—the combinations are endless. Grab tracks or loops from your music library one moment, then your turntable, iPod, or a mic the next. 4TRAK makes it possible to take music from virtually any source and bring it into your mix.

4TRAK is a complete DJ controller, able to handle everything you’ve got, empowering you to perform at your highest level.

4TRAK includes the groundbreaking Numark innovation known as Strip Search. Originally introduced with NS7, this incredible virtual-needle-drop technology allows you to locate any point on a track by using an advanced touch strip on each deck. LED track indicators above each strip provide real-time visual feedback about the tracks position.

4TRAK's platters feature 3600 ticks of resolution per rotation along with automatically adjusting platter sensitivity, giving you high definition turntable control. With ultra-precise, high-resolution 14-bit MIDI, 4TRAK removes the line between hardware and software, giving you incredibly tight response. Bi-colored LEDs also surround each platter, providing both an indication of the Deck in control and also a Deck’s playback status. Effects can be instantly accessed by channel.

From Numark, the leader in professional DJ technology: